The Adventures of Comrade Krieger 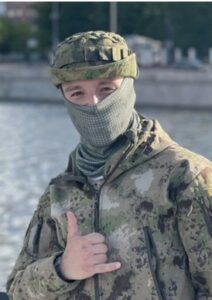 My name is Comrade Krieger (on the left), and I serve in the National Guard, the internal army as it were, and my story begins on the 12th February in Russia, when I was called up to take part in a military training exercise. These are fairly standard practice, and most of the time we get together to brush up on old skills and learn a few new tricks as well.

This time around, we spent our days learning how to set up field camps, doing routine ammo checks, cleaning our kits, “yes sir, no sir”, go over there and fetch that and come back – just getting into the rhythm of regular army life and that sort of thing.

But then, suddenly we were told to load up the vehicles and to move out. Where to? We didn’t know, but we took it all in stride.

As we were driving along, we couldn’t help but notice that we’d crossed the border into Belarus. There was no checkpoint or anything, it was as smooth and easy as pulling into a parking lot, really. It was my first time in Belarus, and even if we hadn’t seen the sign, we certainly noticed that the weather was warmer, and everything was generally better maintained and cleaner.

At this point, no one had told us where we going, yet, but we had started to suspect that this wouldn’t be a routine drill when they started handing out real ammo. We stopped in a field somewhere in Belarus, near a large forest and set up camp. The OMON guys and the Chechens had already started fires and we followed suit, getting as comfy as we could. Our commander dropped a hint that things were about to get very interesting.

Night came and we finally got confirmation that at 5 am the next day we were heading into Ukraine and that at 8pm we’d be in Kiev. We tried to sleep as best we could, but you know how that goes. Anyways, morning came and we got into our vehicles and rolled out.

We were supposed to cross some pontoon bridge along the border with Belarus and Ukraine, but it turned out that it was blown up before we got there, so we returned to camp and spent the day there. The next day, another attempt was made to cross a river, possibly the same one. We got into our vehicles again, but turned back halfway – the bridge had been blown up again. When we returned to camp, we were amused more than we were disgruntled or anything like that. Finally, the decision was made that we would simply cross at another point, across the land border. We re-entered our vehicles and set out and about 100 kilometers later, we had a blowout.

Once the wheel was fixed, we began making progress into Ukraine proper, spirits still high.

I sat in the back and watched from the back window, where I saw a shot-up and abandoned car – one of ours – come into view. It turns out that the advance column had gotten hit by sniper fire and the driver of the vehicle had been killed. Shortly after, our commander decided to play it safe and told us to close up the windows. The car started getting incredibly hot and we started sweating and cooking in our seats. To make matters worse, because of all the false starts, we were now running low on water.

It was an armored car, by the way. I had trained in Urals before, but this was a newer version.

Soon after, our commander relented and the windows reopened just in time for us to see the first villages and towns, some which were on fire and a smattering of corpses along the road.

“How are you feeling?” I asked my friend sitting next to me.

We pulled over to let some columns pass ahead of us because, technically, we weren’t supposed to be on the front lines. After all, we were just the National Guard. The rules of this special operation were a bit unclear, and no one seemed to understand how exactly this whole thing was supposed to work out. But that didn’t bother us much.

We ended up camping in the field where we had pulled over to let the column pass for a few days.

We found some water at a well, which was a relief and shared rumors that had passed up from the front from the people who had went on ahead. The column that we had just seen had gotten shot up by 40mm guns (АГС) and those were the first losses from our side that I personally heard about.

We weren’t far from a village and as we began to dig in, we were given more equipment. I was given a sniper rifle and told to do my best with it. I decided to get my sleeping bag and put it on the BTR as a cushion so that I could be comfy while at my post.

But just as I had set up on my perch, the commander told us that we have to move out, and that people in black were seen nearby. The problem with this information was that we didn’t know what to make of it. See, our OMON guys also wear black. So no one knew who it was and the commander, after some deliberation, ordered a few of us to go out and to ask them, “hello, who are you?”

Our lads jogged off in the direction that the commander had indicated and then came hurrying back.

It wasn’t OMON. And it turns out that the Ukrainians had been sitting on the other side of the same village where we had made camp since we arrived – we simply hadn’t noticed one another. Both sides began firing at each other soon after. I ran to the BTR and got up on the side to get a view of the forest and the clearing. I couldn’t see anything, but the shooting continued. Eventually, I had to hop off as the BTR rolled out to take some shots at the men in black from the other side of the village.

I quickly realized that I had a slight problem to deal with. See, we had these regular, standard-issue helmets and I had a sniper rifle. That meant I couldn’t use the optics while wearing it because the visor got in the way. So, naturally, I took my helmet off and lowered my eye to the scope. My sergeant, who was running by my position saw this and ordered me to put my helmet back on immediately. I told him, “yes, sir,” but as soon as he had finished dressing me down I took it off again, and propped my gun on it.

Almost as soon as the shooting started, it came to a stop though. It was unclear what had happened, but new orders came through. We were told to move on to a new village, so we packed up and rolled out again. This time around, as soon as we reached the village, we began knocking on doors and asking the locals if they saw any soldiers in their village or nearby. They said no, and we left it at that. We didn’t bully or harass them in any way. Soon after, we left again.

Next, we rolled into a small town still further south. We were running low on supplies and so we went looking in the stores, but found that they were already thoroughly looted. There were no products left except frozen mush in the freezers that had spoiled. The town had lost its electricity and gas and the people were suffering from this worse than we were. Luckily, we found some potatoes and pickles and ate our fill.

We didn’t stay in the town and moved back into the fields. While we were setting up a camp, news filtered in that the forward columns had moved away to a different sector and that we were the only ones left in the area. To make matters worse, we were told that a counterattack was coming. We asked many questions, but got even fewer answers. One thing we did learn was that a Ukrainian counter-attack was expected that night. So we dug in as fast as we could, and did the best we could with our defenses. Evening came and we sat in our foxholes and near our vehicles with our weapons ready, stressed out, sure that the fighting would start soon. Every second felt like the moment when the war would finally begin for us.

But we heard only silence and the regular noises of the field as the night dragged on.

Finally, the order was given to go check out what was going on in the forest near our position from which we expected the counter-attack to come and we rose to make our patrol. Just as we did so, the locals in the village about 300 meters away from us decided to launch some fireworks. We thought it was a signal to commence an attack and we rushed back to our positions and gripped our weapons tightly.

We started to relax ever so slightly until we noticed a red glow coming from the village. “This is it,” I thought to myself and sweated some more. But it turned out that a fire had started in someone’s house. Possibly from the fireworks.

Some of the soldiers began to nod off, but then an explosion ripped through the night and we jolted back to readiness. “This time for sure,” I thought. But we got word that a boiler in that same village had exploded.

Night passed into morning and no counter-attack came. We sat in our positions, blinking and yawning and waited impatiently for our new orders.