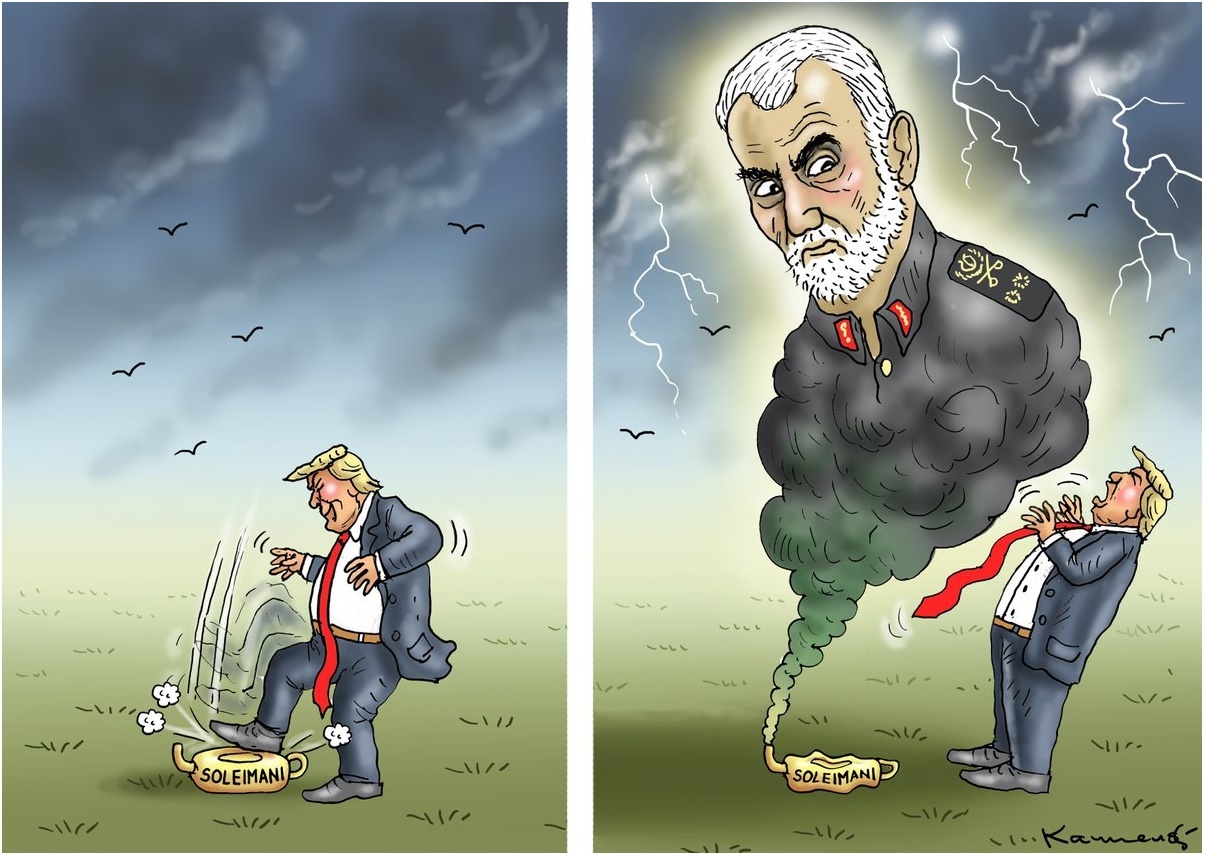 U.S. Will Come To Regret Its Assassination of Qassim Soleimani

By Moon Of Alabama

Today the U.S. declared war on Iran and Iraq. War is what it will get.

Earlier today a U.S. drone or helicopter killed Major General Qassim Soleimani, the famous commander of the Iranian Quds (‘Jerusalem’) force, while he left the airport of Baghdad where he had just arrived. He had planned to attend the funeral of the 31 Iraqi soldiers the U.S. had killed on December 29 at the Syrian-Iraqi border near Al-Qaim.

The Quds force is the external arm of the Iranian Islamic Revolutionary Guards Corps. Soleiman was responsible for all relations between Iran and political and militant movements outside of Iran. Hajji Qassim advised the Lebanese Hisbullah during the 2006 war against Israel. His support for Iraqi groups enabled them to kick the U.S. invaders out of Iraq. He was the man responsible for, and successful in, defeating the Islamic State in iraq and Syria. In 2015 Soleimani traveled to Moscow and convinced Russia to intervene in Syria. His support for the Houthi in Yemen enabled them to withstand the Saudi attackers.

Soleimani had arrived in Baghdad on a normal flight from Lebanon. He did not travel in secret. He was picked up at the airport by Abu Mahdi al-Muhandes, the deputy commander of the al-Hashd al-Shaabi, an official Iraqi security force under the command of the Iraqi Prime Minister. The two cars they traveled in were destroyed in the U.S. attack. Both men and their drivers and guards died.

The U.S. created two martyrs who will now become the models and idols for tens of millions of youth in the Middle East.

The Houthi in Yemen, Hizbullah in Lebanon, Islamic Jihad in Palestine, the paramilitary forces in Syria, Iraq and elsewhere have all benefited from Soleimani’s advice and support. They will all take actions to revenge him.

Moqtada al-Sadr, the unruly Shia cleric who commands millions of followers in Iraq, has given orders to reactivate his military branch ‘Jaish al-Imam al-Mahdi’. Between 2004 and 2008 the Mahdi forces fought the U.S. occupation of Iraq. They will do so again.

The outright assassination of a commander of Soleimani’s weight demands an Iranian reaction of at least a similar size. All U.S. generals or high politicians traveling in the Middle East or elsewhere will now have to watch their back. There will be no safety for them anywhere.

No Iraqi politician will be able to argue for keeping U.S. forces in the country. The Iraqi Prime Minister Abdel Mahdi has called for a parliament emergency meeting to ask for the withdrawal of all U.S. troops:

“The targeted assassination of an Iraqi commander is a violation of the agreement. It can trigger a war in Iraq and the region. It is a clear violation of the conditions of the U.S. presence in Iraq. I call on the parliament to take the necessary steps.”

The National Security Council of Iran is meeting with Supreme Leader Ali Khamenei to “study the options of response”. There are many such options. The U.S. has forces stationed in many countries around Iran. From now on none of them will be safe.

Ayatollah Ali Khamenei, issued a statement calling for three days of public mourning and then retaliation.

“His departure to God does not end his path or his mission,” the statement said, “but a forceful revenge awaits the criminals who have his blood and the blood of the other martyrs last night on their hands.”

Iran will tie its response to the political calender. U.S. President Donald Trump will go into his reelection campaign with U.S. troops under threat everywhere. We can expect incidents like the Beirut barracks bombing to repeat themselves when he is most vulnerable.

Trump will learn that killing the enemy is the easy part of a war. The difficulties come after that happened.

In 2018 Soleimani publicly responded to a tweet in which Trump had threatened Iran:

“Mr. Trump, the gambler! […] You are well aware of our power and capabilities in the region. You know how powerful we are in asymmetrical warfare. Come, we are waiting for you. We are the real men on the scene, as far as you are concerned. You know that a war would mean the loss of all your capabilities. You may start the war, but we will be the ones to determine its end.”

Since May 2019 the U.S. deployed at least 14,800 additional soldiers to the Middle East. Over the last three days airborne elements and special forces followed. The U.S.has clearly planned for an escalation.

Soleimani will be replaced by Brigadier General Ismail Ghani, a veteran of the Iran-Iraq war who has for decades been active in the Quds Force and has fought against ISIS in Syria. He is an officer of equal stature and capability.

Iran’s policies and support for foreign groups will intensify. The U.S. has won nothing with its attack but will feel the consequences for decades to come. From now on its position in the Middle East will be severely constrained. Others will move in to take its place.

This article was originally published by “Moon Of Alabama”